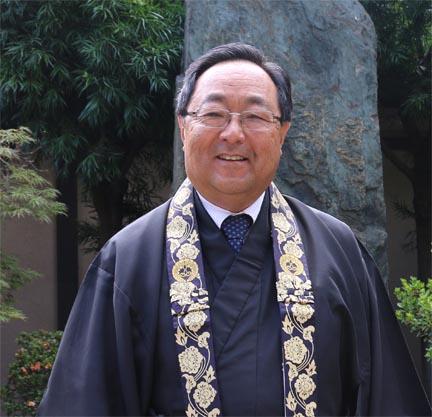 In our services, we frequently chant the Juseige. You might have been a Buddhist your whole life and it’s never been explained what it is that we are chanting. I would like to introduce the first line of the Juseige, “GA GON CHO SE GAN,” which should sound quite familiar to most of you.

Before I can explain the Juseige, I have to explain the background and context of it. The Juseige is not an entire sutra, but is a short poem, gatha, or song, that appears within a lengthy sutra called The Larger Sutra of Immeasurable Life. In that sutra, which is one of the sermons, or talks by Shakyamuni Buddha, the Buddha tells a beautiful story to express what is in his deepest heart of enlightenment. The Buddha often told stories as a teaching method to explain the message or teaching that he wanted to expound on that particular day.

In our modern life, we have lost the sense of the profound nature of stories. Stories are timeless. They captivate our hearts and minds. Just look at Star Wars, or Harry Potter to see how stories capture our hearts and imagination. In the same manner, Shakyamuni Buddha told a timeless and profound story when he gave this sutra. The hero of the story is a truth seeker, a Bodhisattva, by the name of Dharmakara. Dharmakara meets a wonderful enlightened Buddha and is so inspired, that he wishes to become a Buddha and to save all sentient beings from suffering and sorrow.

The Juseige is part of that story, in which Dharmakara states in detail, 48 vows, wishes, hopes, or aspirations that he hopes to accomplish. After stating those 48 vows, he then summarizes them into a short poem, or song, which is the Juseige.

In the first line of the Juseige, it starts with “I.” This “I” is Bodhisattva Dharmakara, the hero of the story, speaking in the first person, stating his deepest wish of life. That is the context of the Juseige.

I make transcend world wish/vow I make a wish that transcends worldly wishes.

Dharmakara makes a wish that transcends worldly wishes. What does that mean? First, we have to discuss what are “worldly wishes.”

Reverend Gyomay Kubose, whom I studied under many years ago, used to say in his talks that everyone should have a deep wish, or vow in their life. For example, you could be a doctor, but as a doctor, your wish is to find a cure for cancer. This could be your lifelong wish as a doctor.

You could be a school teacher, and your deep wish as a school teacher could be to “enable all the children of the world to read.” You are not just being a teacher to put in your 30 years and then comfortably retire and travel. You are a teacher because you want to fulfill a deep wish of your life.

Reverend Kubose’s teacher was Reverend Haya Akegarasu. Reverend Akegarasu underwent a great transformation in his life and how he viewed this story from the Larger Sutra. In his early years, he took it quite literally, because that was how it was presented in those days. Dharmakara made a vow to save all beings and became Amida Buddha who created a Pure Land. We just have faith in Amida Buddha’s vow that we will be saved and taken to the Pure Land.

But in his 30’s he had a spiritual crisis and this Buddha that he objectified “over there” disappeared. In his time of darkness, he re-read, he re-studied this Larger Sutra. Suddenly a different meaning emerged. The dynamic spirit of Bodhisattva Dharmakara began to resonate within him.

Now it was not Dharmakara’s wish, but it was his own wish, his own inner aspiration that was bubbling forth from within. This gave him the spiritual strength and power to stand up and move forward in his life. It was there that he encountered the heart of the Buddha, the heart of Shinran Shonin, and the heart of Bodhisattva Dharmakara.