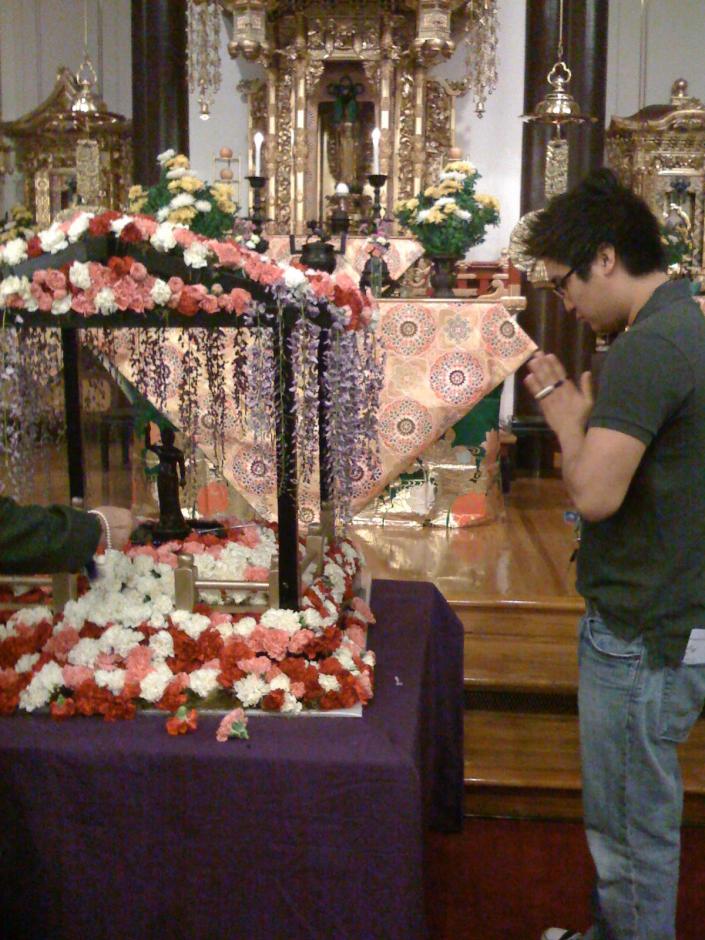 Hanamatsuri literally means “flower festival.” It is celebrated on April 8, commemorating the birth of Siddhartha Gautama. Siddhartha became enlightened as Shakyamuni Buddha, marking the release of sentient beings from suffering and sorrow.

According to our tradition, the historical Buddha, Sakyamuni, was born in Lumbini Garden in Nepal on April 8, 566 B.C. He was born the son of King Suddohana and Queen Maya. There are many flowery descriptions of the scene at his birth, including celestial birds singing beautiful songs, beautiful flowers, and a sweet gentle rain bathing the baby Buddha.

It is not necessarily the beauty of the flowers, the sounds of the celestial birds, nor the sweet gentle rain that fell, but the vibrant fact that on this day was born the greatest of sentient beings who became the Enlightened One, the Buddha.

Q: What is the structure that houses the baby Buddha statue called?

Q: Why do we pour tea over the baby statue of the Buddha?

A: Sweet tea, traditionally amacha (lit. “sweet tea), is poured over the Buddha’s baby statue to correspond with the story of the Buddha’s birth that states that after the Buddha was born the heavens were overjoyed with the birth of the child causing a sweet rain to bathe the infant.

Q: Is there a significance to the elephant entering the right side of Queen Maya?

A: The right side is considered the “side of purity.”

It is said that prior to the Buddha’s birth his mother, Queen Maya, had a dream of a six-tusked white elephant entering her right side. This dream indicated that her son would either become a Cakravartin King, or the greatest spiritual ruler the world has ever seen.​

When the day of the Buddha’s birth neared, as was customary at the time, the Queen made a trip to have her child where her parents lived. En route, the queen decided that she would rest at a beautiful garden she and her entourage were passing. The beautiful garden was Lumbini Garden.

Upon seeing the birth of this special child the heavens opened up and in celebration caused a sweet rain to bathe the child.​​​

Back
This item appears in:
This post has been archived and may contain content that is out of date.