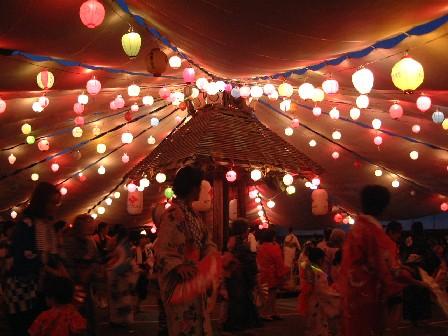 The word ‘Matsuri’ or ‘Festival’ literally means worshipping gods or ancestral spirits. Festivals were usually annual events to bless the cultivation of rice and the health of the community. In order to enliven the celebrations, there were performances of traditional dances and musical instruments.

Obon is a Japanese Buddhist festival usually held in mid-July or August for a week and is a time when the souls of dead ancestors are supposed to return home for three days. In particular, prayers are said for anyone who has died in the previous year as it is believed that they need more guidance to find their way. The festival has been held since the 7th century although many of the events have changed and it is one of the most significant and enjoyable of the Japanese festivals. It goes by a variety of names, the most popular of which is “The Festival or Feast of the Dead”.

While it is not a public holiday, many Japanese who work in the city visit their birthplace at this time every year to clean the gravesites of their ancestors. Others clean Buddhist altars in their home although fewer people have these. Many years ago, Obon and the holiday on January 15th were the only days servants and workers were released to return to their homes.

Vegetables, fruits and rice wine are left out for the spirits to eat. Flowers decorate the graves or altar and incense is burned. This is the time for the living to show their respect to their ancestors. But it is not just the spirits who are given food and drink!

During the celebratory week of Obon, bright red lanterns are hung everywhere. In actual fact, these lanterns were originally to guide the dead spirits home from the spirit world and then back again, but they are usually lit at night for the festival dances.

The celebrations are held in the square, temple or a vacant block of each town. A temporary wooden tower is erected in the centre and, at the top of the tower, a taiko drummer plays. Sometimes this is a recording instead, but generally it’s a real drummer. Large speakers at the top of the tower play special Obon music and men and women in ‘yukata’ or summer, cotton kimonos circle the tower dancing ‘bonodori’.

Bonodori are easy, rhythmic, repetitive dances. Each movement in the dance has a special significance such as digging, threshing wheat and so on. These dances are important because it is said they soothe the spirits of the dead during their visit. This type of dancing can be learned outside the Obon Festival but it is very simple to join in and pick it up as you go. It is worth noting that these traditional dances vary from district to district, as does the music.

The light of the lanterns also shines on many stalls around the outside of the square with everything from corn on skewers to sweet toffee to grilled eel. Games booths are available, too, with games like trying to catch a goldfish with a rice-paper scoop before it dissolves. Stallholders wear ‘happi’ coats with big Japanese characters written on them and often people in the same area or club will have the same colour and symbol on their jackets.

Bonfires and fireworks are common despite the heat, and children (and adults!) go from town to town to see the different displays and dancing. Kyoto is particularly renowned for its Obon Festival because of the displays of rafts with fires on that are released into the river at the end of the week. Most other areas no longer do the burning rafts because of environmental concerns. These fiery rafts are to guide the ancestors back to the spirit world.

At the end of the week of festivities, bonfires and fireworks reach their peak and the temporary festival areas are dismantled. Everyone returns to the cities causing traffic congestion both on the roads and in public transport which is often crowded to double capacity. Obon has finished for another year, and presumably the ancestral spirits return to their world as well!